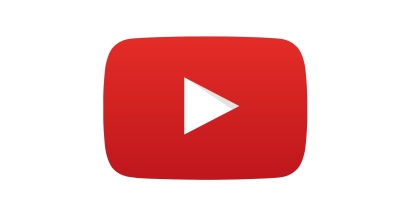 About the Talk
Drawing on ethnographic fieldwork with energy financiers in Houston, Texas, Sean Field explores how experts use a lexicon of models and metrics to conceptualize and construct allegories about future hydrocarbon projects and companies. Dr. Field shows that allegorical narratives built with this lexicon advance a kind of energy ethics – distinguishing what is good and advocating for particular energy futures. As the energy industry pivots toward renewables, Dr. Field argues that these metrics, models and allegories are coming to bear on new forms of extraction. This talk is based on a recent paper, Carbon Capital: The Lexicon and Allegories of US Hydrocarbon Finance. 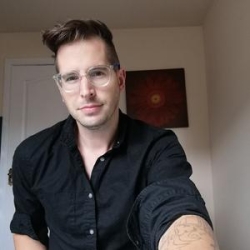 About the Presenter
Sean Field is a Research Fellow at the Centre for Energy Ethics and in the Department of Social Anthropology at the University of St Andrews. Since late-2018, his research has focused on how financial professionals ethically and financially value energy. His ethnographic work explores the calculation of risk, the performance of financial expertise, the valuation of energy resources, and the integration of ESG into investment practices.

A key implication of his research is that the world of finance is central to the materialization of our collective energy and anthropogenic landscapes. Dr. Field's project is part of the larger Energy Ethics research project led by Dr. Mette High and funded by the European Research Council.

Between 2007 and 2013, the Indonesian Government instituted a national cooking fuel conversion program, transitioning households away from biomass and kerosene and towards liquid petroleum gas (LPG) through adjustments to kerosene and LPG subsidies. In this talk, Penn State's Emily Pakhtigian will discuss the household and individual impacts of this large-scale cooking transition. In particular, she will focus on the impacts of early-life policy-induced improved indoor air quality on children's cognitive development and health. As countries around the world look to improve climate and health through clean energy transitions, understanding the social impacts of such policies is essential for developing efficient, equitable, and sustainable policies. 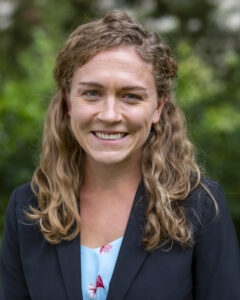 About the Talk
For over a billion households today, electricity is still unavailable, unreliable, or unaffordable. Historically, the use of stand-alone decentralized renewable energy (DRE) for rural electrification primarily focused on powering lights and mobile chargers. In the past decade, the electrification agenda has shifted to a demand-centric approach, focusing on understanding how rural livelihoods, healthcare, and education can be powered by DRE, enabled by a supporting ecosystem. In this talk, Vivek Shastry will present findings from an in-depth field study of rural entrepreneurs in southern India who are using solar powered appliances for a range of rural livelihoods and businesses. Specifically, he explores the market and non-market factors that influence entrepreneurs' access to these solutions, and the mechanisms through which they contribute to building their resilience to future livelihood and climate shocks. 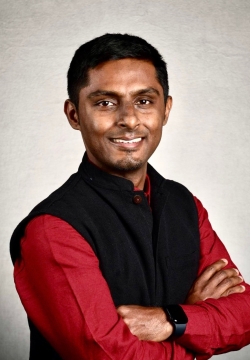 About the Presenter
Vivek Shastry is passionate about facilitating inclusive development through sustainable energy solutions. As a doctoral candidate in Public Policy at the University of Texas at Austin, his current work explores the intersection of energy access, primary health care, rural livelihoods, and gender. Prior to pursuing his doctorate, he earned master's degrees in Sustainable Design, and Community and Regional Planning from the University of Texas at Austin and worked with the policy and planning group at SELCO Foundation. He has traveled extensively in rural India and worked on decentralized renewable energy projects from implementation, research, and policy perspectives.

About the Talk
Understanding the economic impacts of climate change is essential to designing climate mitigation and adaptation strategies, but the magnitudes and mechanisms of these impacts are poorly constrained, as are the contributions of individual actors to these impacts. In this talk, Callahan will discuss his research understanding and quantifying the economic growth impacts of extreme climate events, isolating the roles of individual emitters in contributing to historical climate damages using simple climate model simulations, and illustrating coupled feedbacks between climate adaptation and global warming. Collectively, this work aims to build a fuller understanding of the coupled climate-economy system in a warming world. 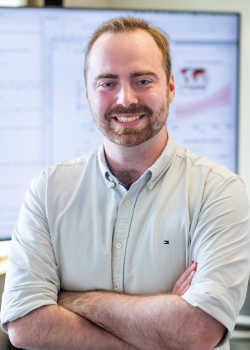 About the Presenter
Chris Callahan is a PhD candidate and NSF Graduate Research Fellow at Dartmouth College in the EEES program, working with Dr. Justin Mankin and the Climate Modeling and Impacts Group. His research focuses on the economic and social consequences of climate change. He uses a wide range of tools, from simple and complex climate models to econometric regression techniques, to understand the relationship between extreme climate events and outcomes such as human health and economic growth. His work aims to inform policy discussions over climate mitigation, adaptation, and loss and damage funding, as well as decisionmaking tools such as the social cost of carbon.

New Energy: Conversations with Early-Career Energy Researchers is an online series featuring graduate, post-doctoral, and other early-career researchers sharing their discoveries and perspectives on energy-related topics. From policy to analysis to emerging technology, this bi-weekly series will give anyone interested in energy the opportunity to learn from the rising stars in the field.

All events in this series take place via Zoom. 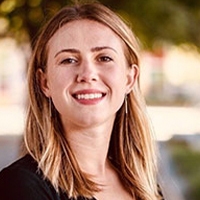 The lithium-ion battery is a key enabling technology for transport decarbonization. While substantial impact reduction can be achieved, their use has also sparked concern due to the use of critical materials such as cobalt, nickel, and lithium. Through the circularity principles of reduce, reuse, repurpose, and recycle, resource conservation and impact mitigation can be achieved. This presentation will discuss current research, industry development, and policy which supports lithium-ion battery material circularity.

Dunn is currently finishing her Doctorate in Energy Systems at the University of California, Davis. During her studies she was a co-facilitator for the California Lithium-ion Battery Recycling Advisory group and a private consultant for the International Energy Agency on topics related to energy technologies and battery systems. In addition, she published several academic journal articles about using industrial technology methods to forecast and evaluate the impact of battery recycling.

Prior to pursuing her doctorate, she earned a master's degree from University College London in Economics and Policy of the Environment and Energy and worked in the energy and environmental consulting industries. 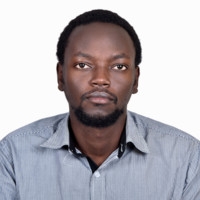 In Kenya, between 2010 and 2015, the number of Small and Medium Enterprises (SMEs) connected to the grid increased by over 60%. Despite this substantial increase, little is known about the behavioral patterns or conditions that contribute to increased electricity consumption among these SMEs. In his talk, Bob Muhwezi, PhD student at the University of Amherst Massachusetts, will discuss a recent study that addresses the problem through a longitudinal analysis of monthly electricity bills for over 179,000 grid connected SMEs in Kenya. The study leverages multiple publicly available geospatial datasets to estimate how complementary infrastructural variables (such as access to roads, markets, financial services, and macro/micro-economic conditions) correlate with sustained electricity consumption growth by SMEs.

Bob Muhwezi is a third year PhD student in the Electrical and Computer Engineering department at the University of Massachusetts Amherst. Prior to joining UMass, he graduated with a master's in electrical and Computer Engineering (ECE) from Carnegie Mellon University-Africa in Kigali, Rwanda. He then worked in the planning department of the Energy Development Corporation (EDCL) of Rwanda where he was responsible for modeling optimal expansion of the nation's generation, transmission, and distribution infrastructure. His current research centers on the application of data-driven methods to understand electricity demand in data-scarce countries. Specifically, he uses a combination of remotely sensed and ground-collected data to understand how infrastructural features influence electricity consumption growth in some sub-Saharan countries.

View a recording of this talk. 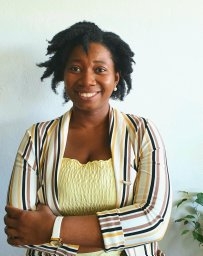 To support the delivery of an equitable and just transition, it is imperative to study models of ownership that can sustainably promote adoption. The aim of the study is to assess the benefits of co-operatively owned and operated storage systems. The underlying hypothesis is that there is a monetary and non-monetary value to residential storage. The hypothesis is built on the flexibility offered by storage as a demand response asset, which can be used by residents in price-based demand response programs and equally provides consumers with increased autonomy and reduced cost.

Vivian Ogechi Nwadiaru received her bachelor's in Metallurgical and Materials Engineering and an MS in Energy Engineering. Before joining UMass Amherst as a Ph.D. student, she completed an International Climate Protection Research Fellowship funded by the Alexander von Humboldt Foundation at the Technical University of Berlin and the University of Oxford, investigating Nigeria's energy transition and proliferation of fossil backup generators. Her research with ELEVATE explores equitable demand response strategies, such as pricing schemes for deploying solar and storage technologies to reduce cost and improve reliability in low-income communities. 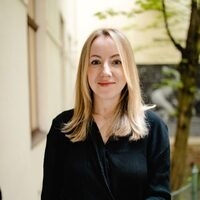 On February 24, 2022 the Ukrainian city of Kharkiv, 40 km from the border with Russia, woke up on the frontline of the large-scale war. The rapid drop in population from 1.5 million to 800,000 and continuous damage inflicted to urban infrastructure led to visible and invisible transformations affecting local habits, the way the city looks, the way its services operate and more. In her talk, Viktoriia Grivina will reflect on some of the strategies that the local government, big and small businesses, transport and communal services, as well as the inhabitants remaining in Kharkiv, have adopted in order to minimize the consequences of the large- and small-scale destructions, energy crisis, and the persistent danger resulting from daily shelling and missile strikes targeting residential areas of the city.

Taking the perspective of a local resident, Grivina will highlight the changes in daily routines of the city, survival strategies and methods of adaptation, from window protection to the rule of the two walls, amendments to everyday routines, shopping, commute and preparations for the winter season. Analyzing these changes might help us better understand how war (and other crises) reveal critical energy issues in the city, flaws in its infrastructure and the potential for energy efficiency improvements.

Researcher, translator, writer, Viktoriia Grivina graduated from V.N. Karazin Kharkiv National University majoring in English and German Linguistics. In 2018-2020 she was awarded Erasmus Mundus Master's scholarship with Crossways in Cultural Narratives programme (Universities of Tubingen, St Andrews, and Bergamo). In 2020 Viktoriia presented her Master's dissertation (The Influence of Street Art on Community Development in Kharkiv, Ukraine). In September 2020, she joined the project "(Un)Archiving (Post)Industry" implemented by the Center for Urban History jointly with the University of St Andrews. In 2021 she started her PhD research at the University of St. Andrews, focusing on mythology, ecology and aesthetics in the city of Kharkiv in the times of war.

February 16: Dominic Bednar, Presidential Postdoctoral Fellow, Arizona State University
"Towards Energy as a Human Right: A Multidimensional Exploration of State and Utility Level Disconnect Policies in the United State During COVID-19"
View a recording of this talk
Learn more about Dr. Bednar

April 21: Michael Davidson, Assistant Professor School of Global Policy and Strategy/Department of Mechanical and Aerospace Engineering, University of California San Diego
"Carbon Neutrality in China: What's Behind the Numbers?"
Learn more about Michael Davidson
View a recording of this talk

May 19: Gregg Sparkman, Postdoctoral Research Associate, Andlinger Center for Energy and the Environment at Princeton University
"Progress on the 'Wicked' Problem: Overcoming Behavioral and Decision Making Hurdles to Address Climate Change and Decarbonize Society"
Learn more about Gregg Sparkman
View a recording of this talk

June 2: Nathan Williams, Assistant Professor at the Golisano Institute for Sustainability at the Rochester Institute of Technology
"Necessary but Not Sufficient: Unlocking the Impact of Electricity Access"
Learn more about Nathan Williams
View a recording of this talk

August 26: Jesse Jenkins, Assistant Professor, Department of Mechanical and Aerospace Engineering and the Andlinger Center for Energy and Environment, Princeton University
"Clean Electricity: the Linchpin for a Net-Zero Economy"
Learn more about Dr. Jenkins
View a recording of this talk

This series is a collaborative effort between professors at Dartmouth College's Arthur L. Irving Institute for Energy and Society and the following colleges and universities: