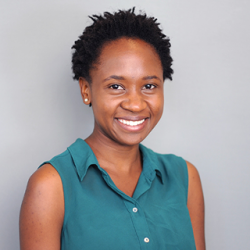 Steffi Mujanji
View a recording of this talk.

Steffi O. Muhanji graduated with a Bachelor of Arts in Physics and a Computer Science minor from Vassar College in 2015. She went on to complete her Bachelor of Engineering degree with a focus on energy systems at the Thayer School of Engineering in 2016. In Fall of 2015, Steffi joined the Laboratory for Intelligent Integrated Networks of Engineering Systems (LIINES) as an undergraduate researcher and is now a Ph.D. student. Her research interests are in renewable energy integration, peer-to-peer energy markets, and the energy internet of things. As a graduate research student, she studies the challenges facing the control of the electric power grid given the growing amounts of variable renewable generation. She has written various software models to simulate and understand the performance of the power grid under different scenarios. Recently, Steffi has published a book on the intersection of the internet of things (IoT) and the sustainable energy transition. After graduation, she hopes to utilize the knowledge acquired from her degree to implement sustainable development programs to help mitigate the impacts of climate change. 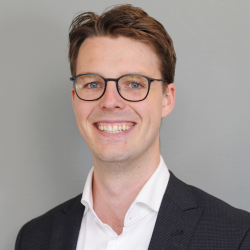 Wester C.H. Schoonenberg is a Doctoral Research Assistant in the Laboratory for Intelligent Integrated Networks of Engineering Systems (LIINES), at the Thayer School of Engineering at Dartmouth.  His research interests include Industrial Energy Management & Demand Response and Integrated Smart City Infrastructure Modeling.  Wester received his B.Sc. in 2014 from the department of Systems Engineering and Policy Analysis Management at Delft University of Technology and joined the LIINES directly thereafter.

About the Talk: Two major trends dominate the 21st century's changing energy landscape: globalization and climate change. The urban population has significantly increased accounting for over 60% of the world's population living on only 3% of the earth's surface. On the other hand, climate change has led to many challenges that are constantly threatening these urban populations. This requires not only sustainable infrastructure systems that can cater to the growing needs of the urban population but also the resilience of these systems and communities towards the effects of climate change. While decarbonization of key infrastructure systems is paramount, recognising the operational interdependence of various systems such as energy-water, and energy-transportation is necessary to realize their synergistic benefits. This presentation covers the study of such interdependent infrastructure systems from two angles: system structure and system behavior.