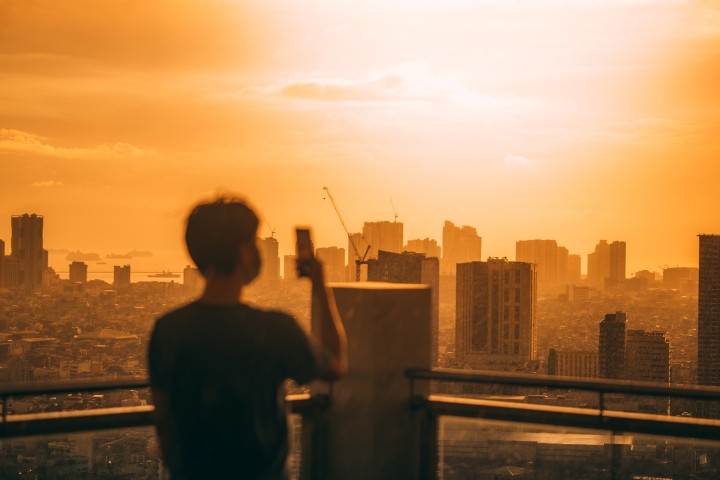 A person using a phone looks out at Manila, the capital of the Philippines, in May 2020. Dartmouth researchers report that the costs from more severe heat waves caused by climate change have been unequally borne by the warm, low-income countries of the tropics and the Global South. (Photo by ajbuenavista/Envato)
Body

Massive economic losses due to sweltering temperatures brought on by human-caused climate change are not just a problem for the distant future. A Dartmouth study published Oct. 28 in the journal Science Advances has found that more severe heat waves resulting from global warming have already cost the world economy trillions of dollars since the early 1990s—with the world's poorest and lowest carbon-emitting nations suffering the most.

Geography professor Justin Mankin and doctoral candidate Christopher Callahan, Guarini '23, combined newly available, in-depth economic data for regions worldwide with the average temperature for the hottest five-day period—a commonly used measurement of heat intensity—for each region in each year. They found that from 1992 to 2013, heat waves statistically coincided with variations in economic growth and that an estimated $16 trillion was lost to the effects of high temperatures on human health, productivity, and agricultural output.

Our work shows that no place is well adapted to our current climate. … The true costs of climate change are far higher than we've calculated so far.

The findings stress the immediate need for policies and technologies that protect people during the hottest days of the year, particularly in the tropics and the Global South where the world's warmest and most economically vulnerable nations are located, the researchers report.

"Accelerating adaptation measures within the hottest period of each year would deliver economic benefits now," says Callahan, who is the study's first author. "The amount of money spent on adaptation measures should not be assessed just on the price tag of those measures, but relative to the cost of doing nothing. Our research identifies a substantial price tag to not doing anything."

The study, "Globally Unequal Effect of Extreme Heat on Economic Growth," is the among the first to specifically examine how heat waves affect economic output, says Mankin, the study's senior author and an assistant professor of geography. "No one has shown an independent fingerprint for extreme heat and the intensity of that heat's impact on economic growth. The true costs of climate change are far higher than we've calculated so far."

"Our work shows that no place is well adapted to our current climate," Mankin says. "The regions with the lowest incomes globally are the ones that suffer most from these extreme heat events. As climate change increases the magnitude of extreme heat, it's a fair expectation that those costs will continue to accumulate."

Climate models and previous research have included heat waves among other extreme events resulting from climate change, such as more frequent flooding and greater storm intensity, Callahan says. But heat waves have a unique signature, he said. They occur on shorter timescales than droughts and the temperatures of the hottest days of the year are projected to increase much quicker than the global average temperature as human activity continues to drive climate change. "Heat waves are one of the most direct and tangible effects of climate change that people feel, yet they have not been fully integrated into our assessments of what climate change has cost and will cost in the future," Callahan said. "We live in a world that has already been altered by greenhouse gas emissions. I think our research helps demonstrate that."

The study results underscore issues of climate justice and inequality, Mankin says. The economic costs of extreme heat—as well as the expense of adaptation—have been and will be disproportionately borne by the world's poorest nations in the tropics and the Global South. Most of these countries have contributed the least to climate change.

The researchers found that while economic losses due to extreme heat events averaged 1.5% of gross domestic product per capita for the world's wealthiest regions, low-income regions suffered a loss of 6.7% of GDP per capita.

Furthermore, the study revealed that to a certain point, wealthy subnational regions in Europe and North America—which are among the world's biggest carbon emitters—could theoretically benefit economically by having periods of warmer days. The economies of other principal emitters such as China and India would be harmed by a greater intensity of extreme heat events given their regional baseline temperatures, the researchers found.

"We have a situation where the people causing global warming and changes in extreme heat have more resources to be resilient to those changes, and, in some rare cases, could benefit from it," Mankin says. "It's a massive international wealth transfer from the poorest countries in the world to the richest countries in the world through climate change—and that transfer needs to be reversed."

In July, Mankin and Callahan published a paper in the journal Climatic Change that assessed the economic damages individual countries have caused to others by their contributions to climate warming. The study presented the scientific basis nations need to assess their legal standing for claiming economic damages due to emissions and warming.

In this latest publication, Mankin and Callahan indicate that the world's principal emitters should foot large portions of the bill for adapting to extreme heat events, in addition to helping lower-income nations develop low-emission economies. In the global economy, sharing the costs of adaptation measures would benefit wealthy and developing nations alike, Mankin said.

"Almost no country on Earth has benefitted from the extreme heat that has occurred," Mankin said. "Global events like the COVID-19 pandemic have revealed the close interconnectedness of the supply chain and the global economy. Low-income countries have disproportionate numbers of the outdoor workers who often generate the raw materials so crucial to the global supply chain—there is absolutely the potential for upward ripple effects."

The research was funded by a Graduate Research Fellowship from the National Science Foundation; the Wright Center for the Study of Computation and Just Communities in Dartmouth's Neukom Institute for Computational Science; and the Nelson A. Rockefeller Center for Public Policy and the Social Sciences.